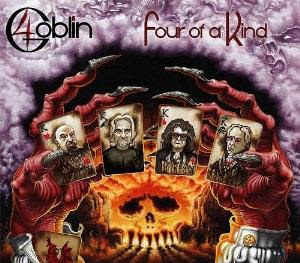 The 23rd album from this Italian band.

Goblin was a four man's band on this album with a lineup of drums, keyboards, bass, synths and guitars. They are Fabio Pignatelli, Maurizio Guerini, Agostini Marangolo and Massimo Morante. Antonio Marangolo does saxophone on the first track.

In other words; Claudio Simonetti is not involved in this incarnation of Goblin.

Neither is this a movie soundtrack either. And when I write these lines, nobody has even reviewed this album in ProgArchives. Which is a great, great shame as ProgArchives is a far better prog rock place than this blog, my own blog. So go forth and review this album for ProgArchives !

This forty-four minutes long album is not a movie soundtrack. But we are still very much in the land of the cinematic progressive rock. Symphonic prog, no less. This album sounds like the best of their movie soundtracks.

It is also a great example of what you can do if you add a sinister sound to an instrumental progressive rock album. It feels like a murdererer is lurking somewhere in my room when listening to this album (it is not me). The combo of synths and guitars is great. A lot of instrumental prog rock bands has a lot to learn from this album and Goblin in general.

The music is very good throughout. My only gripe is the lack of a great song on this album. There are a lot of hints of greatness throughout this album. An album I would rate among their best albums. It among the better instrumental prog albums I have ever heard too. Check it out !