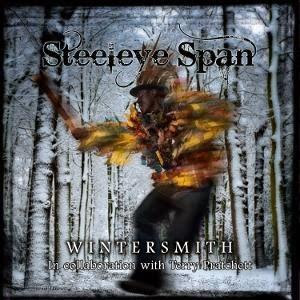 The twenty-first album from this English band.

My last review of a Steeleye Span album was the 1976 album Rocket Cottage. A lot had happen since then.

Tim Hart had left the band in 1982 and then passed away in 2009 (R.I.P). Maddy Prior was still a member of the band and she had got five other musicians too in this band. The lineup was vocals, bass, drums, guitars and fiddle.

The sound had also changed a lot during those years. This is still Steeleye Span, but with a new and updated sound. The loss of Tim Hart is one of the most obvious changes.

Wintersmith was based on the work of the author Terry Pratchett and this album is indeed a collaboration between him and the band.

This album is also mainly a pop-folk album. A few rock and a few pure folk elements are still present. But most of this is pretty clean pop-folk. There are also some Irish folk music tunes here.

This album is just over one hour long and it has a couple of good songs and some decent songs. The title track is a good track. But most of this album is pretty docile and not that interesting. I very much prefer their first albums and would suggest that people interested in this band should stick to those albums.