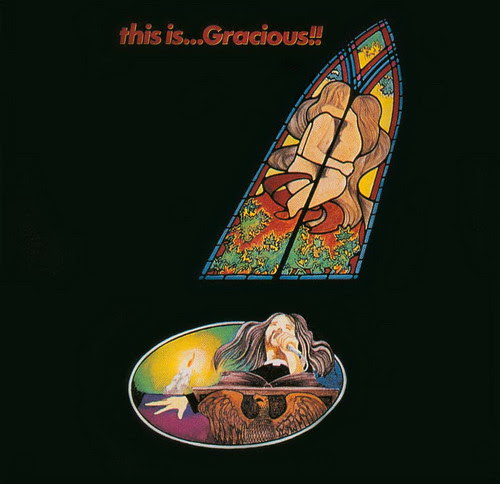 Gracious was a five piece band with a lineup of guitars, bass, drums, Mellotron, keyboards and vocals. Male vocals.

Gracious was one of those sthird division symphonic prog bands who never really reached the heights of Yes, Genesis and Pink Floyd. They mostly opened for these bands on bigger gigs. And that was as good as it could get. The band has been rediscovered with the help of ProgArchives and other similar websites. It was through ProgArchives I discovered them.

The band released three studio albums. I reviewed their debut album back in June 2010. An album I liked.

This forty-three minutes long album really incorporates a lot of different styles. From the semi-classical music of The Moody Blues to the more eclectic and atonal world of King Crimson.

The Mellotron plays quite a big role on this album. After a chaotic start of the album, the Mellotron takes over a lot and creates a lot of harmonies together with the vocals and the guitars. These harmony parts is mixed in with some more eclectic and almost avant-garde like pieces.

This album is indeed a mixe bag. It has also a lot of fans. I am more restrained as I am really missing some great stuff here. There is none. Nevertheless, this is a good album with some very good ideas. Ideas not fully brought into life. Which is a pity.