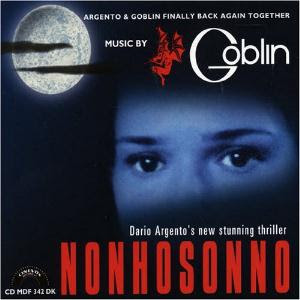 The twentieth album from this Italian combo.

Goblin was a quartet again with all the most important Goblin members featuring. The lineup is guitars, bass, drums and lots of synths and keyboards.

This is the soundtrack for this film. The description of the film sounded so interesting that I have just bought the DVD.

The soundtrack is instrumental throughout too, with the exception of some wordless soprano vocals. Vocals which adds a lot to this soundtrack.

Being a soundtrack, this is based on the movie itself. It is a thriller and horror movie. A movie I very much look forward to watch.

Based on the soundtrack, I am not in for a too scary movie. The music is pretty much in the Camel area of symphonic prog. It also has a lot of neo-classical music. It is not that complicated either. We are not talking about music in the vein of Yes.

The melodies here are good throughout. We are not talking a masterpiece here. It it is nicely ticking over with some nice guitar solos and synths. A piano and a saxophone also chimes in.

Non Ho Sonno is one of the better Goblin albums out there and well worth checking out. It is music I find relaxing and nice on the ear and brain. It is stressfree music with a lot of substance as the music here is really good. Check it out.