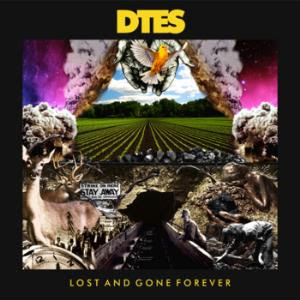 Dream The Electric Sleep is a trio from Lexington, Kentucky. And I have no idea what that band name means. Anyway, their lineup is drums, bass, guitars and vocals. Male vocals.

Dream The Electric Sleep is not a traditional progressive rock band either. It is with a bit trepidations I am reviewing their three albums. The band are still alive, I guess. So more albums will surely follow.

But back to Lost And Gone Forever.

I am not sure what the band thought about themselves on this almost eighty minutes self-released album. An album they do not regard as their debut album. More of a collection of earlier material, I guess. But I am still reviewing it.

This album covers a multitude of genres and styles. From more traditional progressive rock in the Pink Floyd and Yes mould to more AOR, classic rock, hard rock and grunge. There is a lot of Pearl Jam not so well hidden in this album. Soundgarden is also well represented.

A mixed bag in other words and a bit of a frustrating listening experience. The quality is not particular good either. But I am not giving up on this band. It is well worth checking out, this album.