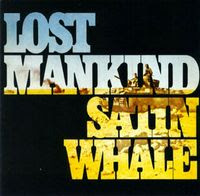 Satin Whale was a quartet with a lineup of saxophone, piano, keyboards, guitars, bass, drums, flutes and English vocals.

The name of the band grabbed my attention and their inclusion in ProgArchives also made me grab their first three albums. I reviewed their 1974 debut album Desert Places earlier this month. An album I quite liked.

The band has not changed much during the few months between these two recordings.

We still get heavy blues-soul with a lot of rock'n'roll too. There are a lot of hints of krautrock here too. The band was pretty active in the German scene and krautrock was the king back then. Hence some psychedelia too on this album.

Their sound is a bit special with this mix of soul and hard rock. The keyboards almost feels like Hammond organs here. The vocals too is very bluesy and soul like.

The music here has also got some Jethro Tull influences. In particular in the flutes and keyboards harmonies.

My rating is therefore a decent to good rating. I am not won over.