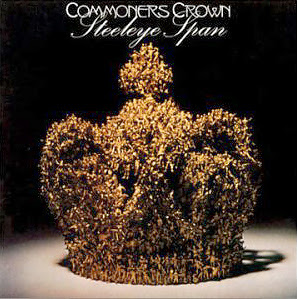 The seventh album from these folk rock legends from England.

The band was a six piece on this album with mandolin, violins, banjo, piano, guitars, bass, tabor, drums, male and female vocals.

Tim Hart does the male vocals while the fabelous Maddy Prior does the female vocals. Both excellent as per usual.

The band had been branching out into progressive rock and rock during their latest albums. And Commoners Crown is following in the same path. Nevertheless, the band still takes time to give folk music their attention. This time including an Irish jig. Not the best track on this album. But still very much noteworthy.

There is a melancholic feel over this album. There are also a couple of light hearted moments here.

I get the feeling that the band is comfortable with what they are doing now. Which can be a bit dangerous as comfortable not always means creativity.

My main and only gripe with this album is the lack of any great songs here. The band has even problem scraping together some good tracks here.

Nevertheless, this is a good album. Barely a good album. Maddy Prior and Tim Hart saves this album's bacon. But this is not a top notch Steeleye Span album.