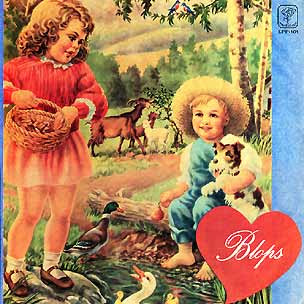 The second album from this Chile based band.

The band was a five piece band with a lineup of acoustic guitars, bass, percussions, lots of local acoustic instruments and Spanish vocals.

Blops was one of the three big folk rock bands from Chile. The other two are El Congreso and Los Jaivas. Blops was not as highly regarded as those two bands. They also only released three studio albums.

Where the two other folk rock bands went a bit melodic and psych folk rock, Blops took one big step towards traditional folk music on this album. Vocals based folk music.

Folk music, but with some folk rock influences too. There is not much instrumental work here inbetween the far too regular vocals parts.

This album is drenched in male vocals and they are not the best ones either.

The music is not particular good either. This album is one big conservative folk music album which shows no risk taking or any musical development whatsoever. Hence, Blops was left behind.

This is a decent enough album. But only that.