Hedersleben - The Fall Of Chronopolis (2015) 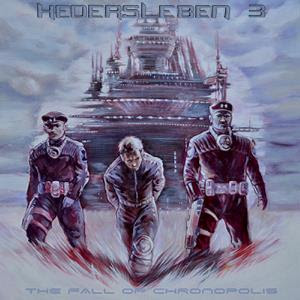 Hedersleben started as an offshot of both Nick Turner's touring band and Brainticket's last album.

They are also a five piece band with a lineup of guitars, violins, keyboards, bass, drums and vocals. Two of the band members are women and the vocals are female vocals. They are all in English.

The Fall Of Chronopolis is also a concept album based on a book of the same name by Barrington J Bayley.

The music is unmistaken krautrock. Unashamed krautrock, too. But krautrock means a lot of various genres put into one genre. So let me explain.....

This is a concept album and has all the hallmarks of a concept album. Which means the band is also entering symphonic prog territory on this forty minutes long album.

But most of all; there is a strong Hawkwind and psychedelic space rock vibe in this music. You can also add the likes of Brainticket too here. The music is indeed psychedelic symphonic prog.

The vocals and the music is good throughout. My only gripe is the lack of any truly great tracks here. Nevertheless; check out this album as new krautrock bands of this type is indeed rare species.