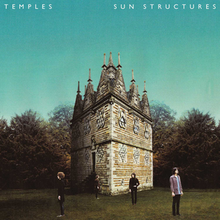 I first became aware of this band when Noel Gallagher from Oasis complained that this album did not get much airplay in BBC. So I had a look into this band and liked what I heard. Mr. Gallagher have a very good point. More airplay, please !!

Temples takes off where The Beatles left it at Sgt Peppers Heart Band. Take a big dash of both their naive pop and one big dash of their more mature pop/rock from that album. Add psychedelic pop/rock too and you get this album. An album who sounds like it is 45 years old, released in 1969. But it is not.

The sound is excellent. It has this hippie feel. So does the music too. It has been created by drums, bass, keyboards, guitars and vocals. The 1969 versions of those instrument. The vocals is very, very good.

Ditto for the songs... Their style is not really my type of music. Nevertheless, I really like this album and I feel that I have discovered a band which I think will go really far in this music biz. The songs here deserves a lot more airplay than anything by any generic pop act. There are a lot of soul and brain in this album. It also takes me back to the naive flower power and hippie era. Which is refreshing in this cynical dog eat dog era. This is a very good album and I recommend it.