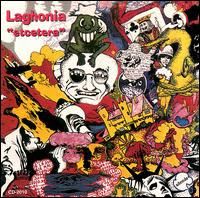 The second and final album from this Peru based band.

Laghonia was one of the pioneers of the South American scene. They played psychedelic rock in the Jefferson Airplane mould. Well, at least on this album. Take a lot of keyboards, guitars, bass, drums and vocals. Then you get this album.

The vocals is in English and the sound is very hippie like. I am not sure if Peru ever had a big hippie scene. Peru is most known for harsh military juntas and repressions. Both from guerrilla movements and the various rulers of Peru. This album is a hippie album though. The sore thumb here is the song I'm A Nigger who does not sound good anno 2014. A rather jolly song with the bad N word. It does not sound good anno 2014.

The rest of the album has got good Hammond organ and guitar harmonies. Ditto for good vocals harmonies. I am very surprised that this album was released from a band from Peru as it is very west-coast USA like. Well, Peru is on the west coast of the South America and maybe the Pacific Ocean does something to people.

I am surprised how enjoyable and good this album is though. It is indeed a good album well worth checking out. Which you should do.