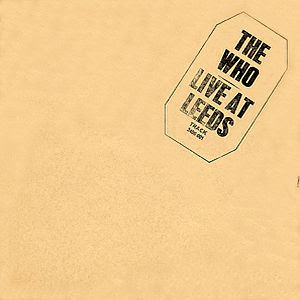 One of the most revered live albums of all.

I am reviewing this album some days after I heard Pete Townsend confess that he cannot stand Led Zeppelin. Strange way to start a review, you may think. I have friends who are fans of The Who (= the reason for the recent spate of The Who reviews in this blog). They don't rate Led Zeppelin at all. I am a Led Zeppelin fan. They are in my view the best rock band ever, The Beatles being the best ever pop band and the best band ever. The Who.... ? I have to admit I don't rate them that much. I like Tommy which is a great album and rock opera. Probably the best ever rock opera.

Live At Leeds though is their hard rock stuff recorded live on a tour to Yorkshire. The other gig on that tour, the Hull one, has recently also been released.

Why don't I rate this album and The Who ? It comes down to philosophies. I am much more prog, folk and jazz orientated than rock orientated. Rock as in the folk hall and holiday parks tradition The Who comes from bores me stiff. I want art. The Who is not art in my view on the material here. I like the stuff from Tommy on this album. Most of their classics leaves me underwhelmed. My Generation, Substitute.... I don't rate them. I like Happy Jack a lot, though.

Live At Leeds is a good live album though where the band rumbles on. It is many ways an essential live album. But....... it still leaves me a bit underwhelmed. Give me Led Zeppelin any day, any year.