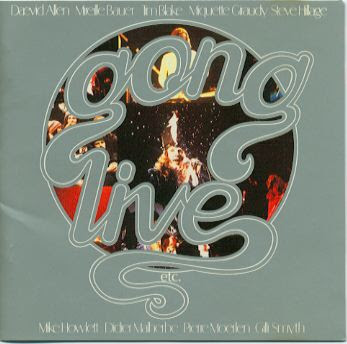 This double album is said to be a mishmash of various live recordings. It is basically two sets where Daevid Allen and his drugged out cups of tea and gnomes dominates. The final half is much more spaced out jams.

....Strangely enough, I have come to like Daevid Allen's tea pots as much as I like the more Steve Hillage dominated space jams here. And I am an avid admirer of Steve Hillage. OK, Daevid Allen falls well into the downright silly category several times during this album. Cringeworthy so. But his tea pots and gnomes really flies and I find myself enjoying this a lot. The best track on this album though is the superb space jam Isle Of Everywhere.

My major gripe about this live album though is that it feels a bit fragmented. That aside, this is a very good live album I really enjoy. I also have some other Gong live albums and will give them some spins later. Gong is still a bit of a mystery to me though. Nevertheless, I feel I am about to crack this nut.