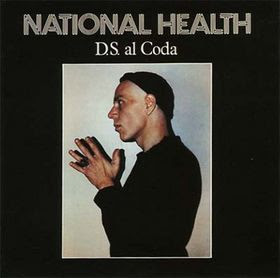 The third and final studio album from this excellent English band.

...Although I am not so sure if this is a real National Health album though. Alan Gowen, one of the mainmen in this band passed away the year before and left some unfinished stuff. This was released as this album and under the National Health name. I think pretty wrongly too. D.S. al Coda is very different from the first two National Health albums. Too different, in my view.

D.S. al Coda is a jazz album with Alan Gowen compositions and pieces. Jazz, but not the mix of fusion, symph and rock as on their first two album. There are even at least one Gilgamesh composition here. There are also a lot of guitars here. That is not something I associate National Health with. There are this good female vocals, used as a sound effect though here and there is a great deal of National Health DNA traces on this album.

The quality of the material is also good throughout. The jazz is very introvert as if Alan Gowen was looking at himself and towards the inside of himself during the last year or so of his life. He passed away after a long fight against cancer. The music is introvert and not particular easy listening. There are no real great songs here either and large parts of this album has this awful 1980s synth sound. It is still a good album though. It is also by far the weakest of their studio albums. If this can be regarded as a National Health studio album, that is. I don't think so.