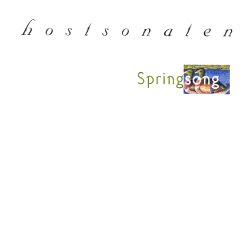 The third album from this Fabio Zuffanti project.

Springsong is Hostsonaten's take on the spring. What a pity that every time I have been listening to this album, a snowstorm has mysteriously appeared. Nevertheless; I still get the gist of this album and I don't think the snowstorms has influenced my views on this album.

Music.... OK, it is not a bad idea to write about the music on this album too. This album is basically a one theme album, lasting forty-five minutes. The album starts with a long flutes passage before moog and melotrons joins in. A long guitar solo and some meddling avant-garde stuff has been added in the middle to break up this long theme before it returns at the end again. This album is instrumental throughout.

When I said Sweden, I really meant Ireland. Well, a mix of Swedish prog and a big chunk of melancholic Irish folk music. Keltic folk music is what it is called. A very warm sound.

I really like this album as it is playing on my heart strings throughout. The sound is great and the music is great. Yes, it is a one dimentional album and if you don't like the first ten minutes, just give up this album as there is nothing else/better turning up later on this album. For me, this album is balsam to my soul and one I will enjoy for many decades. It is a great album.