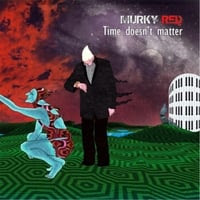 This is to my knowledge the debut album from this Mr and Mrs Fleming run Belgium band. I got the album from them and have taken my time to get into it.

Murky Red is a real band who does a lot of gigs too. It is not a file sharing band who puts together the albums through the world wide web. The experiences Murky Red has got on the roads and in the pub has been put to good use on this album. There is nothing here they cannot play live. There is no fancy studio work here. This album sounds like blood and flesh.

Music wise, they comes across as a power trio. To my knowledge, they are not that. But the comparissons with Rush is obvious. Add a lot of krautrock and blues too into the mix. Strangely enough, there are some Adrian Smith-Dave Murray like solos here too. Murky Red has fused in Iron Maiden into their sound. That and King Crimson too. Not to mention Camel too. It is difficult to pinpoint this band. Murky Red is pretty much out on their own, somewhere near the krautrock scene.

The musicians is doing a great job and it is obvious that this band is the real deal, best enjoyed in a pub. Not in an office somewhere in the middle of nowhere. The overall quality of their material is very good though and this band most definate have a future. I am missing a killer track or two. The material falls a bit down on the anonymouse side of the fence. This is still a very good album they should build on. Both on the road and in the studio.