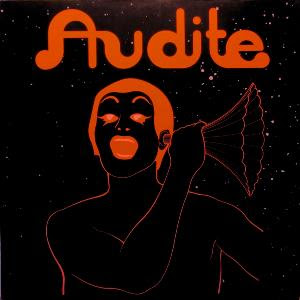 Audite was a five piece band with a lineup of guitars, flute, keyboards, bass, drums and German male vocals.

This album is a private press LP only and it fetches big prices on various auction places. Thankfully, it is also available through Youtube too.

The band is listed in ProgArchives as a neo-prog band. I am not sure although I will not argue with ProgArchives on this matter.

ProgArchives also sold this album (OK...... I used Youtube) to me as a Genesis copy. Well, they must mean Genesis the Phil Collins era. From their self titled album era.

What I get here is a forty-six minutes long album with some pretty long songs around the eight minutes mark. The music is much more AOR and German rock than neo-prog. OK, Genesis from their self-titled album era is a good reference too. That is far from being my favorite Genesis album and era.

There are some piano, keyboards and guitars here. The drums and bass does not account to much. The horrible vocals is also pretty much everywhere. The music is far from being expansive and an adventure. It is in fact very safe music which does not raise much interest here.

It is in my view an abysmal bad album which does nothing for me. This album just annoys me. Purely annoys me. The cliches are coming too fast for my liking. The feeling of having endured these riffs and melodies before is pretty overwhelming.

This album is simply an album to avoid. Avoid it at all cost.